The shepherd girl who cried wolf! Credibility and the campaign against sexual abuse

Let’s be clear. Sexual violence and rape continue to plague our societies.  In the United States, police figures indicate that 1 out of 6 women have been the victim of attempted or actual rape. In the UK, there are 85,000 women and 12,000 men raped every year; that’s roughly 11 rapes every hour.

These figures don’t tell the story of the damage that rape and sexual abuse can have on individual peoples’ lives. The emotional trauma and psychological impact can be severe, and long-lasting. My daughter was sexually abused when she was young and it took her nearly 20 years to even be able to talk about it, let alone to start on a recovery process.

A key reason that sexual abuse continues is because wider society appears to condone it. When a man who publicly brags about groping women is elected the President of the United States, it reinforces the false notion that a man successfully forcing himself on a woman is a real man, and that a woman’s initial protests are merely part of the relationship game. It reinforces the idea that ‘boys will be boys’ and that sexual aggression and abuse are basically natural and OK.

To end sexual violence will therefore require men, as well as women, opposing this notion and challenging those who justify or even joke about unwanted and forced ‘sexual conquests.’

This is why the He for She campaign, is so important – where men are standing up against sexual abuse. Donald Trump’s comments about groping women should be offensive not only to women, but also to men. The fact that millions of Americans were not offended by this and voted him into office is frightening. Men must tell other men that sexual abuse is not OK. We must all be like the good shepherd ensuring that the sexual ‘wolves’ are not free to perpetuate their violence. This will help to strip away the societal support that still exists for rape. 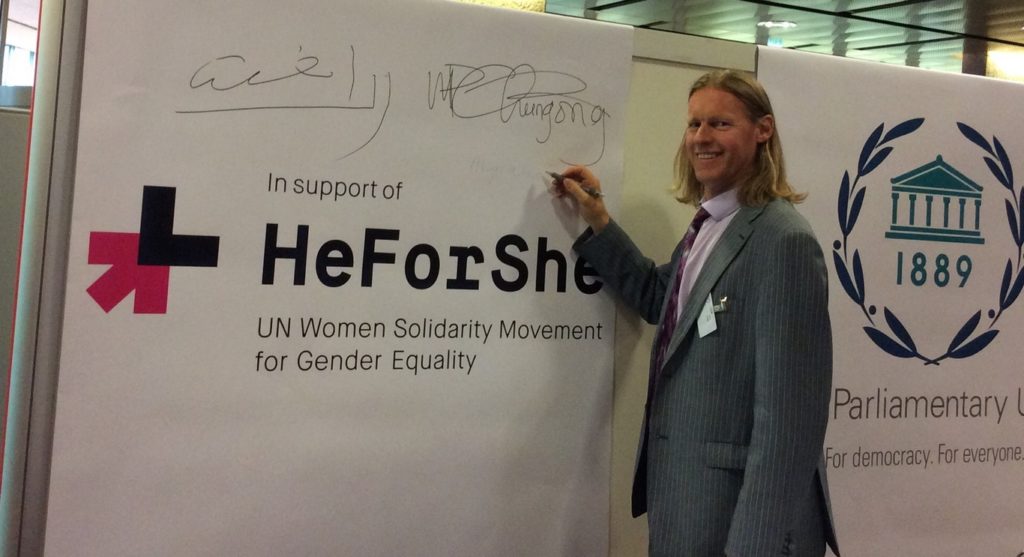 Alyn signing the He For She banner at the Inter Parliamentary Union Assembly in Geneva.

The He for She campaign also challenges the erroneous and destructive idea that ‘all men are rapists (actual or potential)’. We are not. Many of us are horrified about sexual abuse and would never contemplate forcing ourselves on another. To assume that all men are rapists – that boys will be boys – excuses this horrific behaviour as if it were somehow ‘natural.’ It is not. So we must be just as vigilant against the false allegations of rape made against men. These can be as damaging as sexual abuse itself.

In July 2015,  17-year old Jay Cheshire committed suicide as a result of the psychological trauma of being accused of rape, despite the fact that he had been acquitted of the accused crime. According to his mother, Jay was a very sensitive young man who could not cope with the societal shame of merely being accused of such a horrific act – even though he was innocent.

I understand how Jay felt. A few years ago I was also falsely accused of rape – not by the woman I was accused of raping. She has maintained that our 4-year relationship was mutually supporting and non-abusive. No, the false allegation was made by a woman who had a personal vendetta against me and was competing for status and funding in the international non-profit world.

Despite zero evidence to support the false accusation, the allegation spread like wildfire because the accuser was a woman, the alleged crime was so heinous, and the non-profit community in which we are active is so sensitized to the issue of sexual abuse. The accuser did not lodge a complaint to police, as that would have been easy to refute. Rather she spread it by word-of-mouth throughout our international non-profit network. There was nothing I could do to prevent severe damage to my personal and professional standing, nor to stop the collapse of funding for the initiatives in which I was a leader.

In addition, the false allegations have been psychologically devastating. To be accused of such a heinous act, and to have former colleagues believing the allegation merely because they are made by a woman, has been a nightmare. It brings a schizophrenic feeling of both shame, despite being innocent, and rage at the gall of someone to make such horrific allegations against someone who is innocent.

Until then I had been one of the most optimistic people around. If some-one showed me a glass half-empty, I not only celebrated that it was half-full, I was excited about how to fill it (and then drink it and fill it again). Now, for the first time ever, I sunk into depression, a depression which continues now,  as I have found no way to stop the lies being spread despite them having zero basis in fact. For the first time I understood how an innocent person like Jay Cheshire could contemplate suicide. For a person who had faith in peace, truth, humanity and the possibility to resolve conflicts, I have hit a brick wall against people who have no interest at all in this. And these are so-called peace people.

There is a story told by Aesop, a slave and storyteller from ancient Greece, about a shepherd boy who repeatedly tricks nearby villagers into thinking wolves are attacking his flock. When one actually does appear and the boy again calls for help, the villagers believe that it is another false alarm and the sheep are eaten by the wolf.

My accuser was a woman who cried wolf for her own personal benefit, and the rest of us suffer as a result.

Postscript: Online sexual harassment has become very common these days. I recommend Women’s Guide to Cyber Safety 2022 as a resource to help deal with such harassment.