New Zealand and the new treaty to prohibit nuclear weapons

On July 7, 2017, the United Nations adopted a Treaty on the Prohibition of Nuclear Weapons (nuclear ban treaty) following 5 weeks of negotiations.

122 countries voted in favour of the treaty, demonstrating the clear and unequivocal acceptance of the majority of UN members never to use, threaten to use, produce, possess, acquire, transfer, test or deploy nuclear weapons. The treaty will be open for signature on September 20 and will enter-into-force once 50 States ratify.

UN Secretary-General Antonio Guterres noted that ‘The treaty represents an important  step and contribution towards the common aspiration of a world without nuclear weapons.’

The negotiations in New York took place as New Zealand was commemorating the 30th anniversary of its historical legislation prohibiting nuclear weapons. The legislation was controversial back in 1987, splitting New Zealand off from its allies including the United States and Australia, but gaining respect for New Zealand from the majority of the world’s countries that even then were nuclear-free. Now 30 years later these non-nuclear States are ready to take the next step to prohibit the weapons.

Commemorations around the country highlighted the ban treaty as a new opportunity to ‘export’ New Zealand’s nuclear weapons ban to the world.

‘New Zealand has led the way, but now wants the rest of the world to follow” said Hon Phil Goff, the Mayor of Auckland and former Minister for Foreign Affairs, speaking at a 30th anniversary commemoration organised by the NZ Peace Foundation.

‘New Zealand has followed up its legislation by taking leadership in global nuclear disarmament initiatives, such as cases against nuclear weapons in the International Court of Justice, and now these nuclear weapons prohibition negotiations,’ said Dr Kate Dewes, Co-Chair of the Disarmament and Security Centre, and Leader of the New Zealand civil society delegation to the ban treaty negotiations.

‘The New Zealand Nuclear-Weapon-Free Zone Act of 1987 provides an exemplary model of prohibition measures to be adopted in the ban treaty,’  said Alyn Ware, New Zealand disarmament expert in New York for the negotiations. ‘The Act not only prohibits the manufacture, possession, transit or control over any nuclear weapons in New Zealand. It also prohibits anyone from assisting others in such activities. The New Zealand experience demonstrates that it is possible for countries to implement such prohibitions.’

Impact on the nuclear-armed States

The nuclear-armed and allied States opposed the treaty, and are unlikely to join. As such, they will not be bound by its provisions. Regardless, adoption of the treaty strengthens the global norm against nuclear weapons, and could impact on the policies and practices of the nuclear-armed States.

According to the Disarmament and Security Centre: ‘The Treaty strongly stigmatises nuclear weapons, bringing them closer to other indiscriminate, inhumane weapons that are banned under international law, such as chemical and biological weapons, anti-personnel landmines and cluster munitions. Prohibiting nuclear weapons will help to build political will for disarmament, and is a vital next step towards a comprehensive nuclear weapons convention that would provide for their complete elimination, like the enforceable conventions that exist to eliminate other weapons of mass destruction.’

‘The ban treaty could help build the political momentum to push the nuclear-armed States to adopt significant measures at the 2018 UN High Level Conference,’ says Alyn Ware, speaking at a side event on the 2018 HLC held during the ban treaty negotiations.  ‘Already parliaments in the nuclear-armed States are starting to ask their governments what they will deliver in terms of nuclear disarmament measures at the 2018 UNHLC.’

The ban treaty could also impact directly on the policies and practices of the nuclear armed States if the States parties to the treaty include in their national implementation measures a prohibition on financing of nuclear weapons and on transit of nuclear weapons through their territories, airspace and territorial waters.

Alyn Ware speaking in a plenary of the UN negotiations, on prohibiting financing of nuclear weapons production.

Many of the countries supporting the nuclear prohibition treaty have public funds (such as national pension funds), and banks operating in their countries, that invest in corporations manufacturing nuclear weapons and their delivery systems. So far, a handful of countries including New Zealand have divested public funds from these corporations. If they are joined by a sizeable percentage of the countries ratifying the ban treaty, this will have significant impact on the nuclear weapons corporations and their lobbying power.

The experience of New Zealand in prohibiting port visits and transit of nuclear weapons, and in divesting from nuclear weapons corporations, was presented to the UN negotiations on the ban treaty by civil society representatives, and could be very helpful to other countries as they undertake their ratification process. (See UN nuclear ban treaty negotiations: transit, threat and nuclear weapons financing).

Background to the ban treaty process

The ban treaty process has been driven by a growing recognition of the risks and catastrophic humanitarian and environmental consequences of nuclear weapons use, and by frustration amongst non-nuclear States at the failure of the nuclear-armed States to deliver on their obligations to negotiate and achieve comprehensive nuclear disarmament.

Earlier this year, the Bulletin of Atomic Scientists to move the hands of their ‘Doomsday Clock’ to 2½ minutes to midnight, highlighting the growing risks of a nuclear catastrophe due increasingly unstable leadership of nuclear-armed States and increased conflicts and tensions between Russia and the West, North Korea and its neighbours, India and Pakistan and between China and others in the South China sea.

In 2010, the States Parties to the nuclear non-proliferation treaty (NPT) concluded that any use of nuclear weapons would have catastrophic humanitarian consequences, and agreed that ‘All States need to make special efforts to establish the necessary framework to achieve and maintain a world without nuclear weapons.’

This opened the door to non-nuclear States taking the lead in a series of UN Open Ended Working Groups (OEWGs) on taking forward nuclear disarmament negotiations, without having to wait for agreement from the nuclear-armed States. These OEWGs resulted in a decision to negotiate a treaty to prohibit nuclear weapons (ban treaty) under the auspices of the UN General Assembly.

The decision differed from previous calls by the United Nations to negotiate a nuclear weapons convention (a global treaty to prohibit and eliminate nuclear weapons) in two key ways:

The negotiations would also differ from those that take place in the traditional disarmament forums, the Conference on Disarmament and the Non-Proliferation Treaty Review Conferences, which generally operate by consensus. The ban treaty negotiations would be undertaken under UN General Assembly rules of procedure which allow for a vote on the final outcome, and so cannot be blocked by those who oppose.

New Zealand and the ban treaty

The New Zealand government contributed strongly to this process by being one of the leaders in the OEWGs and the ban treaty negotiations. New Zealand was also among the leaders of the humanitarian initiative which helped build political will to pursue this new disarmament initiative, and served as a vice-president of the negotiating conference for the nuclear weapon prohibition.

The New Zealand government can continue to play a lead role in implementation and follow-up by: 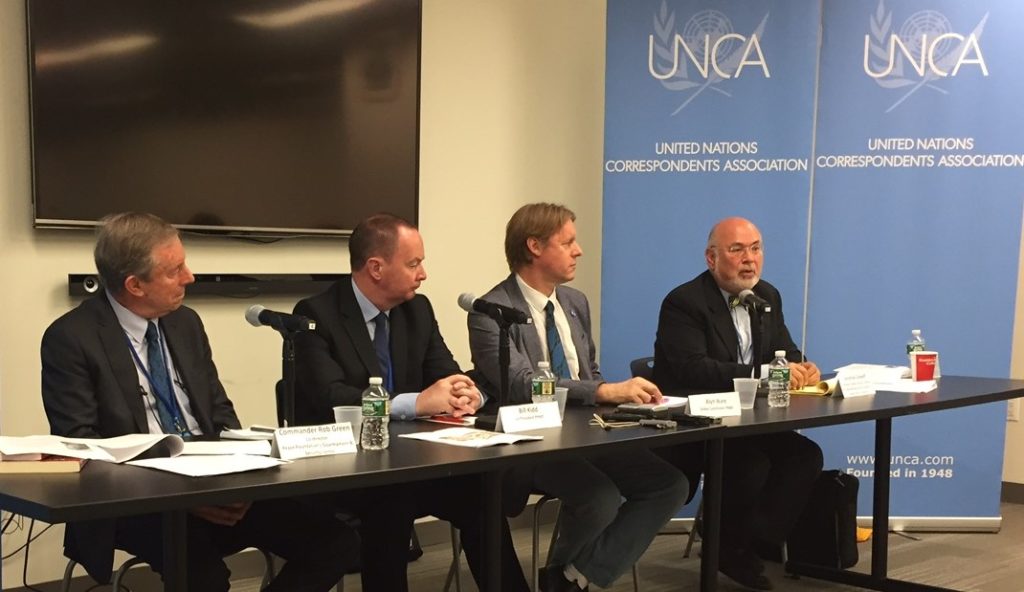 Press conference at the UN to release the Parliamentary Action Plan for a Nuclear-Weapon-Free World. Speakers included Rob Green and Alyn Ware from New Zealand.