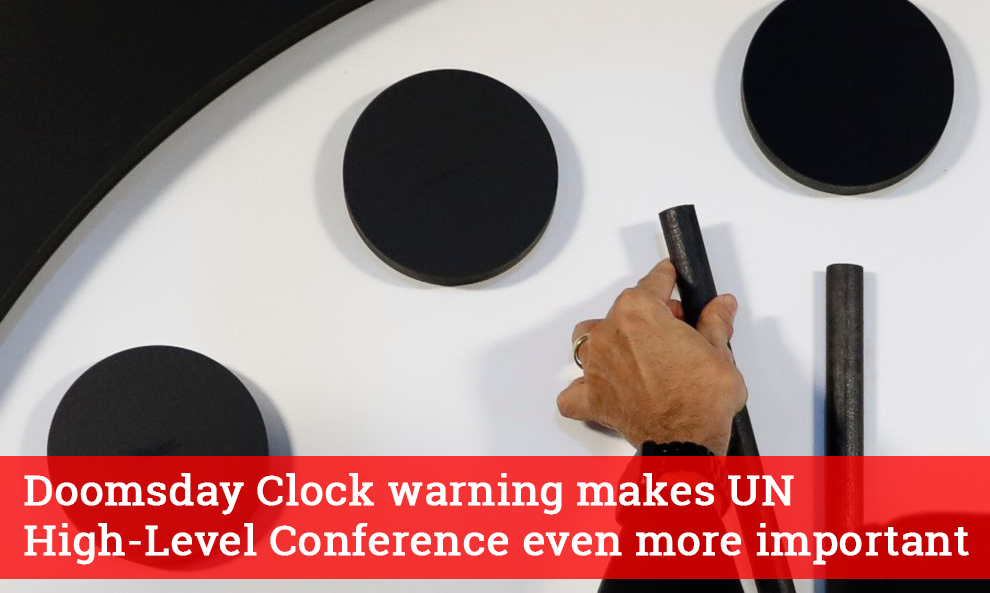 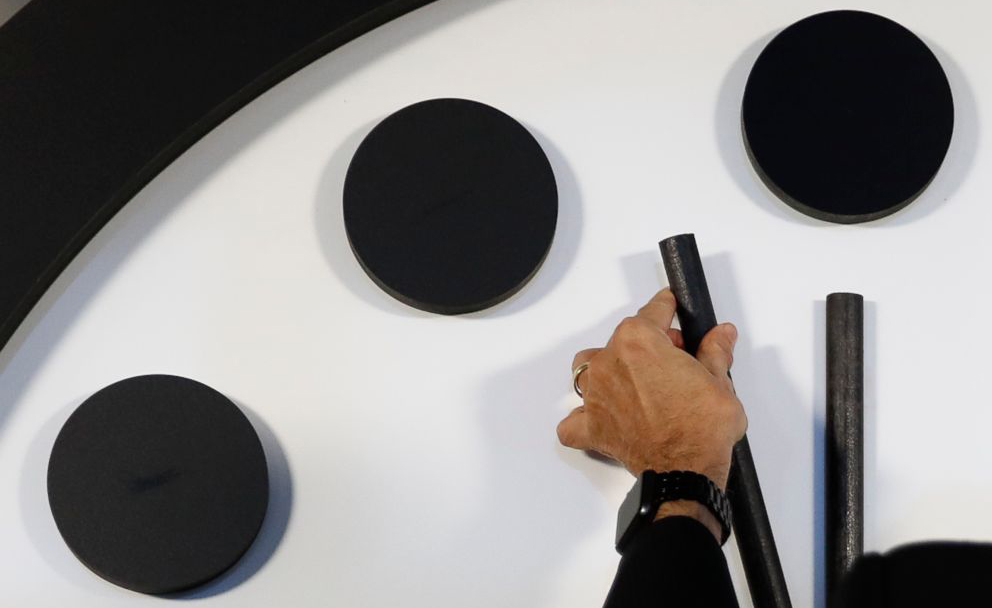 Last week, the Bulletin of the Atomic Scientists moved the hands of the symbolic Doomsday Clock to 2 Minutes to Midnight, indicating that the threat of a nuclear war through accident, miscalculation or intent has risen to an alarming level, and that climate change is not being averted.

The Bulletin highlighted nuclear threats between the U.S. and North Korean governments, including “hyperbolic rhetoric and provocative actions on both sides.” They also lamented ‘the decline of U.S. leadership and a related demise of diplomacy under the Trump administration”.

The Bulletin expressed deep concern over a range of unresolved conflicts and increased tensions involving all the nuclear armed countries. And they decried the failure of the international community to roll-back carbon emissions in order to prevent catastrophic climatic consequences of increased atmospheric carbon. See 2018 Doomsday Clock Statement.

The Bulletin put forward a number of actions that governments should take to ‘rewind the clock’ and prevent the destruction of civilization from nuclear war or catastrophic climate change. But such actions won’t occur unless there is sufficient political push. This is what makes the upcoming UN High-Level Conference on Nuclear Disarmament so important.

Scheduled to take place at the United Nations from May 14-16 this year, the conference will attract attendance from world leaders of most UN member states. They will be expected to take – or announce at the conference – actions to reduce the risks of a nuclear holocaust and to make progress on global nuclear disarmament.

Such actions could include: taking all nuclear weapons off launch-on-warning and high alert; adopting policies never to initiate nuclear war (no-first-use); agreeing not to develop new nuclear weapons systems; removing all forward-based nuclear weapons (such as U.S. nuclear weapons deployed in Europe); commencing negotiations on the phased reduction and elimination of nuclear stockpiles; and reducing nuclear weapons budgets in order to release resources for climate protection and phase-out of fossil fuels.

Such actions have already been laid out in various multilateral forums, such as the UN General Assembly and Non-Proliferation Treaty Review Conferences. However, to-date there has been insufficient political will to adopt and implement these measures.

The UN conference provides an opportunity for the UK and other nuclear-armed States to make progress on incremental disarmament measures to which they agreed in the Non-Proliferation Treaty conferences but have not yet implemented,’ said Baroness Sue Miller, Member of the UK House of Lords and a Co-President of Parliamentarians for Nuclear Nonproliferation and Disarmament.

In 2010, States Parties to the Nuclear Non-Proliferation Treaty (NPT) – including both nuclear and non-nuclear States – agreed that any use of nuclear weapons would cause catastrophic humanitarian consequences, and that all States should make special efforts to establish the necessary framework to achieve and maintain a world without nuclear weapons.

This agreement should have led to cooperation on a range of nuclear disarmament measures. Unfortunately, the reverse happened. Nuclear-armed States retreated from their commitments, and non-nuclear States advanced without them on other initiatives not agreed in 2010, in particular to negotiate a Treaty on the Prohibition of Nuclear Weapons (ban treaty). The treaty which was adopted on 7 July 2017, but is supported only by non-nuclear States.

The division has been exacerbated on the one hand by non-nuclear States alleging that nuclear weapons provide no security role what-so-ever, and on the other hand by the nuclear armed and allied states refusing to reduce or replace nuclear deterrence with other approaches to security.

The UN High Level Conference provides an opportunity to bridge these divisions and enable progress to be made on both strands – the comprehensive, ban treaty strand and the incremental, nuclear risk-reduction strand. See Food for thought paper on the NPT, Ban Treaty and the 2018 UNHLC

On January 18, the UN Security Council held a special session on Weapons of Mass Destruction and Confidence Building Measures, chaired by Nursultan Nazarbayev, President of Kazakhstan.

Kazakhstan is a supporter of the Treaty on the Prohibition of Nuclear Weapons, and unilaterally relinquished the nuclear weapons they possessed in order to become a nuclear-weapon-free country. However, the Kazakh government realizes that other countries relying on nuclear weapons will need to have confidence in cooperative security mechanisms in order to eliminate this reliance and negotiate comprehensive nuclear disarmament.

A key goal put forward by President Nazarbayev, and supported at the UN Security Council Session, is the goal to achieve the global elimination of nuclear weapons by 2045, the 100th anniversary of the founding of the United Nations. This target challenges the nuclear-reliant countries to make concrete-time bound plans to phase out their reliance on nuclear deterrence. Yet it is far enough away to give them a realistic chance to achieve such plans.

A key contribution to the UN Security Council Session was made by UN Secretary-General Antonio Guterres who noted that “global anxieties about nuclear weapons are the highest since the Cold War.” Guterres noted the nuclear threats between North Korea and the USA, but welcomed the “mini-thaw” that has permitted North and South Korea to field a joint team for the coming Winter Olympic Games.

Guterres also announced that he intends “to explore opportunities to generate a new direction and impetus for the global disarmament agenda.” It is expected that later this year he will launch a major proposal along these lines, similar to, but updating, the 5-point proposal for nuclear disarmament released by the previous UNSG Ban Ki-moon on UN Day, October 24, 2008.

Government leaders attending the UN High-Level Conference in May are expected to elevate their support for nuclear risk reduction measures, as outlined above. Some are already being advanced at the United Nations, including through UN General Assembly resolutions such as those to move the nuclear-armed States to reduce their readiness to use nuclear weapons.

Support is coming from key parliaments and inter-parliamentary bodies. The Parliamentary Assembly of the Organisation for Security and Cooperation in Europe (which includes the legislatures of the U.S. Russia, France and the UK), has adopted resolutions submitted by members of Parliamentarians for Nuclear Nonproliferation and Disarmament (PNND) calling for a lowering of nuclear threat postures, de-alerting and the adoption of policies never to initiate nuclear war (no-first-use).

In contrast to President Obama who advanced the commitment to a nuclear-weapon-free world and took measures to make progress toward this goal, the Trump Administration has reinforced its reliance on nuclear weapons and appears to be walking away from disarmament commitments. This is reflected in the current United States Nuclear Posture Review, a draft of which was leaked by the Huffington Post on January 11.

However, there has been renewed action by the U.S. Congress on key initiatives including by senators in the hearings of the Senate Foreign Affairs Committee on the President’s authority to unilaterally use nuclear weapons. In addition. U.S. Senator Ed Markey, PNND Co-President has introduced legislation into the Senate (with companion legislation in the House introduced by Ted Lieu) to restrict the authority of the U.S. President to launch a nuclear attack without first consulting congress.

In the UK, Labour leader Jeremy Corbyn, who is also a leading PNND member, has announced that if he were to become Prime Minister, he would not authorize the use of nuclear weapons.

These actions, along with the increased international awareness of the humanitarian consequences of any use of nuclear weapons, provide openings for the UN High-Level Conference to address, and make progress on, nuclear-risk-reduction measures in order to prevent the use of nuclear weapons.

Up until recently, nuclear disarmament has been the poor second cousin to global action on climate change, with much less public awareness and political traction. What is emerging for the UN High-Level Conference is not only that nuclear risks are as important to address as risks of climate change, but also that the two issues are connected. Nuclear weapons budgets consume resources required to phase out fossil fuels. In addition, nuclear weapons postures increase tensions between key countries, preventing the cooperation required to achieve global carbon emission targets.

Civil society participating in the UN High-level Conference will make these connections, including through a Move the Nuclear Weapons Money action and campaign, which aim to shift nuclear weapons budgets to climate protection and other social, economic and environmental needs.

Ban treaty at the UN Conference